For many of us, crocheting is a central piece in our life puzzle: it can be a relaxing retreat from everyday life, a business, an artistic medium, an intergenerational connection, or a way to reach out to a community through service. Curled up with a classic pattern in your favorite crochet spot, do you ever

For many of us, crocheting is a central piece in our life puzzle: it can be a relaxing retreat from everyday life, a business, an artistic medium, an intergenerational connection, or a way to reach out to a community through service. Curled up with a classic pattern in your favorite crochet spot, do you ever wonder, “Who do I have to thank for this?”—and not just who designed the pattern or taught you to crochet, but who got the metaphorical yarn ball rolling for the very first time?

Tracing the origins of crochet is even more slippery than other art forms, particularly because our favorite craft could have originated in many different locations, all of which might have been independently developing these skills at the same time. According to Ruthie Marks of the Crochet Guild of America, leading crochet researcher Lis Paludan has not found conclusive proof of crochet’s presence in Europe before the 1800s, even though some argue that a type of “lace” in France, Italy, and England could have been an early form of crochet. However, the European scene might have been late to the crochet game. Paludan suggests that the earliest examples of crochet-like techniques could be found in Chinese dolls and South American ceremonial attire, or it could have made its way to Europe along trade routes from the Middle East. “A Brief History of Crochet” from Hubpages and “Crochet” by Lindsey Shen agree with Marks that originally a technique called tambour utilized a fabric backing and a needle-like hook, drawing on a tradition of ancient Chinese needlework also used in other parts of Asia. This eventually became what French called “crochet in the air” once the backing was no longer used, launching our modern-day crochet.

According to Hubpages, Kathryn from Crochet Concupiscence, and Marks, crochet entered the mainstream in European publications as the 1800s picked up steam. The slip stitch, called “shepherd’s knitting” at that time, was first name-dropped in Elizabeth Grant’s 1812 The Memoirs of a Highland Lady. After that, the first printed patterns—that researchers know of—were the ones which delighted readers of the Dutch magazine Penelope in 1824 (according to Monika from Handmade Artists, however, more recent research argues it is a Swedish magazine which was the very first publication to print patterns in 1819). Beginning in the 1840s, Mlle. Riego de la Branchardiere catapulted crochet into the spotlight with her professional pattern books, inventing “Irish crochet,” according to Marks and Hubpages.

Moving into the mid-1800s, the facts are more concrete, and researchers agree that the Irish potato famine played a pivotal role in the history of crochet. Writing about the 2005 exhibition of Irish crochet Lace at the Lacis Museum of Lace and Textiles, Zelda Bronstein calls crochet “the art that saved the Irish from starvation.” Although many lives were tragically lost during the famine, many others were indeed able to stay afloat thanks to crochet. Bronstein and Marks both point to the way that Irish men and women made crochet products such as collars or dresses to bring in desperately needed income during the crisis period of 1845-1850. The Irish crochet style was a new interpretation of intricate lacework, but thanks to the hook, it drastically reduced production time while increasing the opportunity for families to collaborate through motifs—meaning that Irish crocheters could maximize output. This was such a valuable source of aid that crochet schools were set up to teach the craft to others. According to Wool and the Gang, even royalty got involved in the 1800s: Queen Victoria bought Irish lace from women who still needed support after the famine, and she even learned to work up a few scarves herself.

In her article for Crochet Insider, Denise J. Lavoie maps out how crochet played a role in another key moment of history: Progressive Era America. Reform was the word of the day, from pushing for women’s suffrage to combating the ills of industrialization, and crochet found itself in the center of several movements. Lavoie illustrates how diverse fiber art introduced by immigrants revived an American interest in crochet. This led to a new appreciation for the craft as a hobby as well as a valuable resource for everything from art to charitable outreach to garments that could stand up to the rough conditions of the West. Particularly for women, crochet meant progress. Although individual women dealt with different types of discrimination, a common barrier many faced was the division between public and private life. This pressure to exist primarily in the home as dependents of men excluded them from politics and more public avenues of expression. As Irish men and women had done, so too did American women: crochet became a source of income. This extra cash gave women much-desired independence. Lavoie gives the example of designer Anne Champe Orr, who published her patterns through her own publishing company, which also created jobs for others. She also cites other women who added great innovation to the craft, such as Mary Chard, who has become well known for her Mary Card charts of crochet patterns, and Antonie Ehrlich, a prolific designer and instructor. Lavoie’s article also reveals that crochet’s recent popularity and its continued relevance to the women’s movement reflect how women can “reclaim” a craft that has often been looked down upon because of its position in the woman’s sphere.

“One of the hallmarks of crochet at the beginning of the 20th century was that for American women, for the first time, it was a choice. Reclaim on!” Lavoie writes for Crochet Insider.

According to Wool and the Gang, crochet continued to be a powerful force in the tumultuous times of the 1900s. Like most fiber arts, crocheters contributed to soldiers during wartime by providing hats and other necessities. In the post-World Wars era of the last few decades, crochet has not just been a hobby or invaluable method of survival; it has also become fashion. As Wool and the Gang point out, even Clint Eastwood wore a granny square vest once, and crochet has become a regular star on catwalks, in magazines like yours truly, and among celebrities (Stitch and Unwind writes that stars such as Madonna, Eva Longoria, and Meryl Streep are all known crocheters). Red Heart Yarn writes that crocheting helps with stress, motor skills, joints, moods, and even math skills! Like during the progressive era, crocheted products make a difference in the world as charitable donations to nursing homes, the Red Cross, children in need, and other organizations.

Crocheting has been threaded throughout the past two centuries, as a source of financial support, pleasure, and artistic expression. From 1800s’ Irish lace to 21st century tablet cases, crochet has been here through it all. So, when you crochet, know you’re in good company not just with all of us today, but with the many men and women of the past who have enriched the world through this wonderful fiber art. 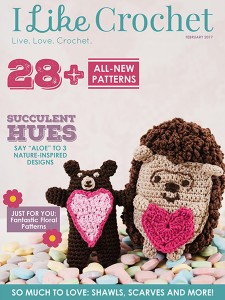