Vivid red poinsettia motifs are framed in white and green while a pretty little join resembling a snowflake fills in the holes between motifs in this festive holiday throw. This intricate pattern makes a fun holiday decoration for any couch or chair this Christmas season.

There are many ends to weave in. Therefore, be disciplined and weave them in as you complete motifs.

You will be joining via slip stitches to 8 points on surrounding motifs.
1. There are a series of ch-5 spaces that join motifs at the side in rnd 4. When working this center join, sl st in the side of sc that joins the ch-5 spaces. This is join 1.
2. Between the joins discussed above, there are 4 free-standing ch-3 spaces and 3 sc stitches on each motif. Sl st in the center sc of these 3 sc. This is join 2.
With B, ch 8, sl st to close ring.
Ch 1, (sc in ring, ch 6, work join 1, ch 6, sc in ring, ch 5, work join 2, ch 5) 4 times, sl st to top of starting sc.
Feel free to vary the number of chains above, as small differences in gauge and size of motifs can affect how many chains are needed here. 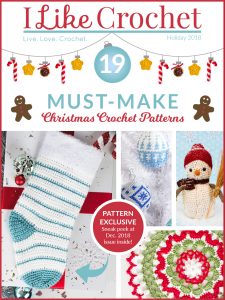