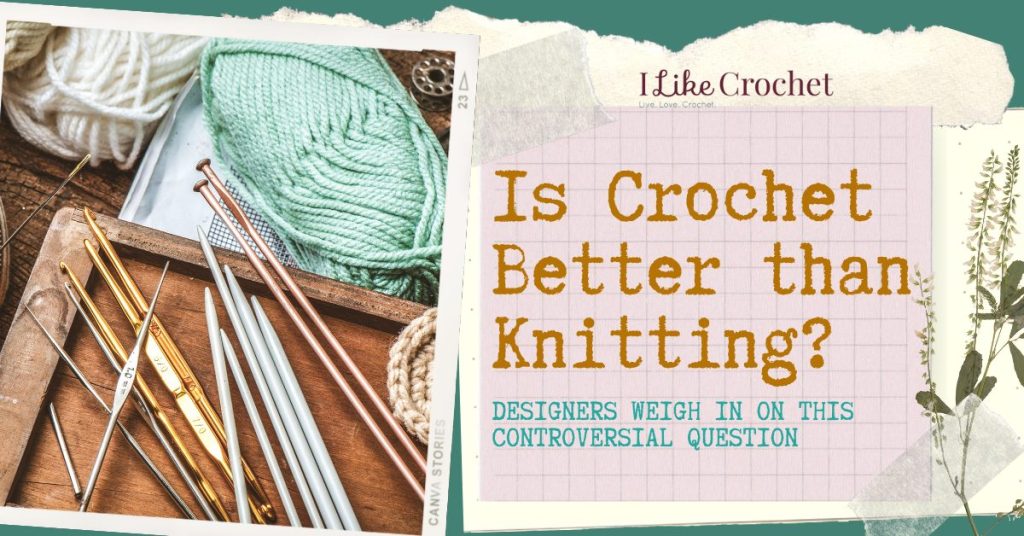 Not to worry, this article isn’t about bashing knitting or creating some sort of divide between knitters and crocheters. We just want to explore and see what people have discovered while dabbling in both skills. Perhaps crochet is better for some things. Perhaps knitting is better for others. Let’s hear what some of our designers had to say:

“Crochet is faster than knitting and you only need to keep track of one stitch at a time instead of a whole row.” – Kati Brown

“Crochet is better because it’s faster than knitting and best suited for people looking for quick results.” – Shehnaaz Afzar

“Oh, this is controversial, but crochet is better because you only need one hook vs. two needles!” – Emma Wilkinson

“Only one loop to keep track of! And, the whole thing won’t fall apart if you miss a stitch.” – Caroline Cameron

“Crochet is better because it’s much less scary to frog a project — there is only one live stitch!” – Adinda Hening

“Crochet is better because I can’t get the hang of knitting.” – Susan Heyn

“Crochet hooks are much less likely than knitting needles to be considered ‘sharp objects’ by security! I bring my crochet to placces where knitting needles might run the risk of being confiscated.” – Sarah Dawn

“Definitely crochet! It’s easier to do while on the go. Take it from me: you break a lot more needles in rough seas than you would crochet hooks. Plus, crochet hooks can double as an emergency hair clip after a busy day touring and traveling. Imagine trying to put a 16” circular needle in your hair. Not going to happen! – Rosann Fleischauer

Some of our designers knit and crochet. Here’s what they had to say:

“From someone who both knits and crochets, crochet is personally better for me because it uses a set of muscles that are different from knitting which are less prone to arthritis. Crochet is also SO MUCH quicker! It does use more yarn, but hey: I’ve got more yarn than time!” – Michele Maks

“Is crochet really better? I do both and I can’t say one is easier than the other. Each is geared toward different projects.” – Nazanin Fard

“I can’t say one is better than the other since I enjoy both crafts. I will say that crochet is more portable since there is only one tool to keep track of when traveling.” – Sonja Otto

“Can’t say one is better than the other. Yarning is fabulous no matter the craft. Although, I will say, it’s easier to yarn with one hand vs. two if you’re crafting at work.” – Arica Presinal

What do you think? Have you tried knitting? Is crochet better? Leave your thoughtful comments below (stay civil everyone!).