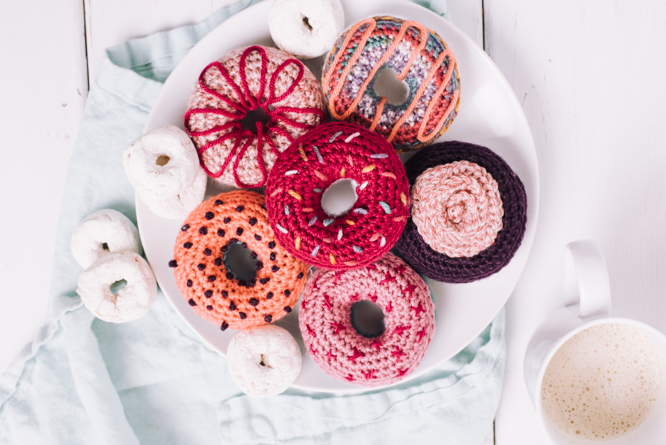 Crocheting has never made us so hungry! These donuts are about the size of real ones, making these a quick and satisfying project. With numerous topping and base options, the sky’s the limit when it comes to how many different donut combinations you can come up with.

Each donut is worked in two pieces. First, the base is worked. Then, the upper part is worked upward from the beginning edge of the base. The upper part is joined to the last row of the base by slip stitching them together. A smaller hook than usual is required for this yarn in order to achieve a firm fabric that the stuffing will not show through.

Rnd 1: With BC1, fsc 18. Bring ends together to form ring but do not join. Work will be done in a spiral. Place a removable marker on first st and move up each rnd.

Rnds 6-8: Sc in each sc around. Fasten off after last rnd. Weave in beg and ending tails to make the piece look as seamless as possible.

Rnd 1: With FC1 and RS facing, work sc in each fsc of base. Do not join. Work will be done in a spiral. Place a removable marker on first st and move up each rnd.

Note: 1 less rnd is worked for Frosting as base.

Cut a 1 yd piece of FC5. Split piece of yarn in half so that it has only 2 plies. Embroider cross stitches on Frosting piece using photo as a guide.

With FC2, work as for Donut 1 Frosting.

With FC3, work as for Donut 1 Frosting.

With FC6, embroider sprinkles on Frosting piece using photo as a guide. To get all of the different colors shown, pull from different parts of the striping sequence of FC6.

With FC4, work as for Donut 1 Frosting.

With FC2, *bring yarn up from WS of Frosting piece to RS of piece, tie an overhand knot close to surface, take yarn back to  WS of piece 1 mm away from entry point; rep from * across Frosting piece, placing knots approximately 0.5” apart.

With FC5, work as for Donut 1 Frosting.

With FC6, work as for Donut 1 Frosting.

Join Base and Frosting (All Donuts):

Bring Base up and through the center so that WS of Base and Frosting are together. With Frosting side facing, *with yarn in back, insert hook through back (closest) lp of Base sc and back lp of Frosting sc, sl st**, rep from * to ** until ¾ of sts have been joined. Stuff dounut very firmly. Rep from * to ** until 2-3 sts rem unjoined. Finish stuffing donut very firmly. Join rem sts. Cut yarn and pull through last st. Sew to beg sl st invisibly. Weave in ends.

Weave long tail in and out of base sts from fsc. Gather slightly and allow to coil into a mound of cream filling. Turn over. With sewing needle and thread, tack layers of cream into place. Sew base of cream to Frosting.

Glue a strand of FC3 to Frosting, using glue sparingly, and using photo as a guide.

Glue two strands of FC4 to Frosting, using glue sparingly, and using photo as a guide. 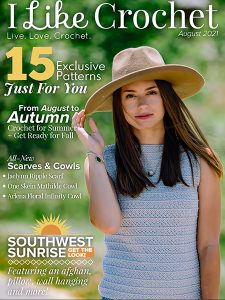